A Place To Shout Out Loud - Featured Author: Morgan Bell

American short story writer Nathan Englander has said that aspiring authors can be paralysed by a misunderstanding of the advice “write what you know”.

Many people equate this oft quoted expression as an instruction to make all your stories thinly veiled autobiographies. Englander said “If you’re a drunken, brawling adventurer, like Hemingway, no problem.” Similarly, if you were the kid of a slave owner in confederate Missouri, in a Mississippi River steamboat port town, you will be well-positioned to pen the next Huckleberry Finn or Tom Sawyer. This was Mark Twain’s real experience, and the “write what you know” quote is attributed to him.

Those of us who live hum-drum lives of suburban normalcy - straight, white, middle-class, middle-aged, middle of the road, average joes – may feel they are restricted to writing about laundry powder and grocery shopping and the perils of designing meals that are all at once tasty, healthy, and affordable.

I put to you that authors using an extended metaphor to explain their existence in this world does come under the banner of “writing what you know”. Genre fiction, such as fantasy, romance, or horror, is often dismissed as unrealistic escapism. But I think there is more.

Many people, including myself, believe the function of fiction is not merely to document a plot, but to express an attitude towards the events of the plot, and to use plot as a catalyst for conveying emotion. Can your thinly veiled autobiography occur on the moons of Saturn, or in Victorian England, or the Spanish Inquisition? I say yes, of course it can. All narratives are just a way of interpreting reality. Even a memoir isn’t unfiltered reality, it is one angle, one perspective, with emphasis on a few key events. What we are really writing about is less about facts and more about feelings.

Facts have their place. Historical fiction writers need to be as good at research as they are at constructing a sentence. If a character exists in a place or time that is not your own then you do them a disservice by not investing in research. Even if you are writing about a future or another universe, you will need to build that world with factual continuity. The consequence of not researching, is having a reader distracted by factual anomalies and plot holes.

At a writing workshop in 2014 I had a brief exchange with Australian fantasy and historical fiction novelist Kate Forsyth on this very topic. She makes it well known at her speaking engagements that she dislikes the expression “write what you know” because it limits people’s imagination.

Kate used her novel The Wild Girl as an example of how a person could write about something they don’t know and still produce a highly successful novel. She said her character Dortchen Wild (a real historical person who passed on folk tales to the Grimm Brothers) lived in a little village in Germany during the Napoleonic Wars, circa 1805. That was not Kate’s own life experience, as a contemporary Australian. She had nothing in common with the real historical figure of Dortchen. Kate didn’t speak Dortchen’s language, didn’t know first-hand what it was like to be in that time, place, or situation. It was not until Kate researched every detail about the culture and customs that Dortchen was submerged in, that she was able to form her on the page. Therefore it is possible for one to write about a topic or universe that they are not personally familiar with.

Now I begin to wax philosophical. My contention is once you complete your research, the constraints of your subject became known to you. You didn’t know them at first, but you found out, and now you know. Given this new-found knowledge, you are able to fill in the detail of how your character would have reacted in a given situation with how you would have reacted were you in her exact same shoes.

Here Kate and I come to an agreement. Yes technically my hypothesis is true. However it is also true that most people do not interpret the saying “write what you know” in the way I described. The majority of people take the idea of knowledge as literal and static. Pig farmer equals pig stories. Tyre shop owner equals car stories.

I also think that no matter your subject matter your real life will permeate your fiction. I work as a traffic engineer in local government, and my writing is littered with engineering terms. They are woven seamlessly into my descriptions and dialogue because they are an active part of my vernacular. My story Strings & Ribbons from my collection Sniggerless Boundulations shows the tugs of war between my artistic and practical sides, one always distracted by the other.

My story Garsdale is about a haughty abseiler on a rescue mission. In real life I am afraid of heights. But maybe I am the one being rescued. Or maybe they are both me, the high achiever and the recluse. It is often asked of authors, “How much of your characters are really you?” I think they are all me. The heros and the villains, the talkers and the mutes, they are all little slivers of the complexity that makes up who I am.

During a recent fan Q&A for Indie Author Appreciation Week I was ask if I thought writing was always self-reflective. I said yes, even if the author doesn’t know they are doing it, every word chosen over another reads like a confessional.

Sniggerless Boundulations is a collection of fifteen pieces of flash fiction, ranging between 150 and 2,000 words per story. After a year of positive reviews and feedback I now use the tagline “The horrors of life in fifteen slices”. Readers use the book like a mirror to see themselves, and their own fears and insecurities. Universal themes like jealousy, anxiety, time, and aging make Sniggerless Boundulations the perfect looking glass for introspection. And that is me writing what I know. 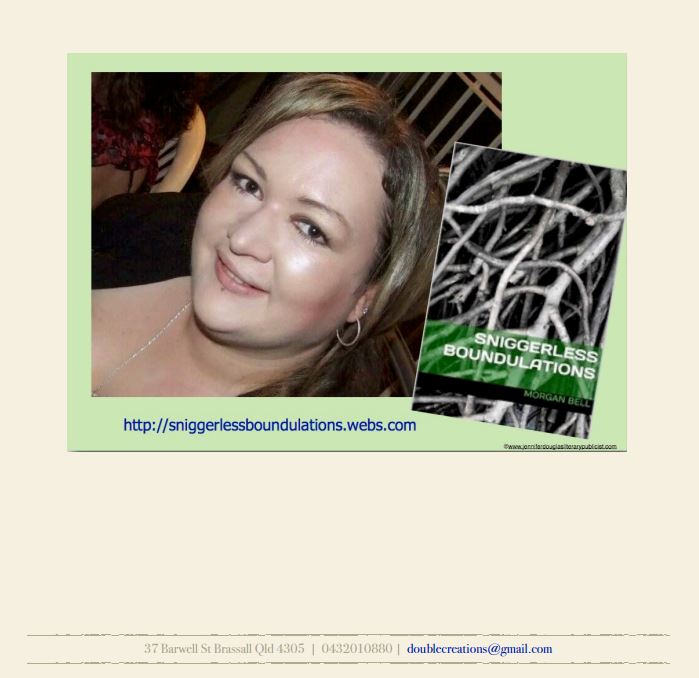 This article was originally published in the Jennifer Douglas Literary Publicist newsletter, which I recommend signing up to.

Oops, you forgot something.

The words you entered did not match the given text. Please try again.